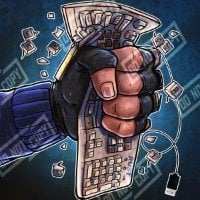 IQHeadReward - with this plugin, you can bring a new gameplay to your server by adding notes of the wild west to it.
Make players fight with each other, it can also be applied on single servers, group and clan!

Automatic announcement of a reward for the head :

A smart system of automatic announcements of rewards on the head of players!
You can :

Manual announcement of the reward for the head :

Thoughtful and easy-to-use manual announcement of the reward for the head by your players
The interface is made in the "Step-by-step task creation" mode , which will allow you to see the stages of creating a task by a player and will not allow you to send an ad without finishing it
Players can :

Quite an interesting reward system, I decided not to use the standard issue of items from "nowhere"
Now if a player has completed a task, his reward will be scattered around the map in boxes, depending on the number of reward elements, one box holds 6 items, if there are more rewards, there will be more boxes in different places on the map
The boxes will be buried underground (smallstash) and closed from above with a barricade, which will need to be broken to get to the box (it breaks easily enough)
This will add interest to your server and more goals in order to run around the map, and as we know-running around the map, you meet adventures along the way! I hope you will like this system

System display on the G map :

Display of the player who has a reward assigned to him - if a reward was assigned to a player for his head, he will be displayed on the G map for all players on your server

Displaying rewards for killing a player by ad - if a player has completed an ad, his reward will be scattered around the map and highlighted on the G map for him personally, no one except this player will see his reward on the G map

Protection against abuse of team players :

There are team players who may want an "easy loot" and will want to abuse the rewards for the head, leaving the team and killing their teammate for whom the reward is assigned. I have provided for this problem, now even if a player leaves the team, re-enters , disbands it, whatever, and kills his former teammate - the reward will not be given to him, of course it will not last forever, this lock will be hung on players if they were in the team before the award was assigned to his teammate and removed from them for some time, so that there is no effect of "abuse in a friendly way"

The remaining settings are available in the configuration and language file, you can view them in the "Configurations" tab or "Language file" on the resource page

Permissions :
iqheadreward.invise - adds immunity to the automatic announcement of a bounty on the head