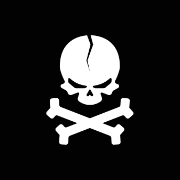 Troll those cheaters in style with the Rocket Man !
After exploding up in the sky their loot will drop all over the place, just like a Piñata.

All users with the Oxide "admin" role will get access to the command, but you may grant per user/group access using the permission oxidationtrollrocketman.use.

This plugin is not the same as Tommygun's payback plugin as seen in Camomo_10's content.
If you are looking for that then go to https://payback.fragmod.com/